Blink: The Power of Thinking Without Thinking

Veröffentlicht am 30. April 2015 von gettinger
According to Gladwell’s research, we think without thinking, we thin-slice whenever we “meet a new person or have to make sense of something quickly or encounter a novel situation.” He says, “Snap judgments are, first of all, enormously quick: they rely on the thinnest slices of experience … they are also unconscious.”(p. 50)

“We thin-slice because we have to, and we come to rely on that ability because there are lots of hidden fists out there, lots of situations where careful attention to the details of a very thin slice, even for no more than a second or two, can tell us an awful lot.” (p.44) 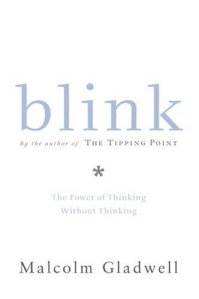 Q and A with Malcolm

It’s a book about rapid cognition, about the kind of thinking that happens in a blink of an eye. When you meet someone for the first time, or walk into a house you are thinking of buying, or read the first few sentences of a book, your mind takes about two seconds to jump to a series of conclusions. Well, Blink is a book about those two seconds, because I think those instant conclusions that we reach are really powerful and really important and, occasionally, really good.

You could also say that it’s a book about intuition, except that I don’t like that word. In fact it never appears in Blink. Intuition strikes me as a concept we use to describe emotional reactions, gut feelings–thoughts and impressions that don’t seem entirely rational. But I think that what goes on in that first two seconds is perfectly rational. It’s thinking–its just thinking that moves a little faster and operates a little more mysteriously than the kind of deliberate, conscious decision-making that we usually associate with “thinking.” In Blink I’m trying to understand those two seconds. What is going on inside our heads when we engage in rapid cognition? When are snap judgments good and when are they not? What kinds of things can we do to make our powers of rapid cognition better?

2. How can thinking that takes place so quickly be at all useful? Don’t we make the best decisions when we take the time to carefully evaluate all available and relevant information?

Certainly that’s what we’ve always been told. We live in a society dedicated to the idea that we’re always better off gathering as much information and spending as much time as possible in deliberation. As children, this lesson is drummed into us again and again: haste makes waste, look before you leap, stop and think. But I don’t think this is true. There are lots of situations–particularly at times of high pressure and stress–when haste does not make waste, when our snap judgments and first impressions offer a much better means of making sense of the world.

One of the stories I tell in Blink is about the Emergency Room doctors at Cook County Hospital in Chicago. That’s the big public hospital in Chicago, and a few years ago they changed the way they diagnosed heart attacks. They instructed their doctors to gather less information on their patients: they encouraged them to zero in on just a few critical pieces of information about patients suffering from chest pain–like blood pressure and the ECG–while ignoring everything else, like the patient’s age and weight and medical history. And what happened? Cook County is now one of the best places in the United States at diagnosing chest pain.

Not surprisingly, it was really hard to convince the physicians at Cook County to go along with the plan, because, like all of us, they were committed to the idea that more information is always better. But I describe lots of cases in Blink where that simply isn’t true. There’s a wonderful phrase in psychology–”the power of thin slicing”–which says that as human beings we are capable of making sense of situations based on the thinnest slice of experience. I have an entire chapter in Blink on how unbelievably powerful our thin-slicing skills are. I have to say that I still find some of the examples in that chapter hard to believe.

3. Where did you get the idea for Blink?

Believe it or not, it’s because I decided, a few years ago, to grow my hair long. If you look at the author photo on my last book, The Tipping Point, you’ll see that it used to be cut very short and conservatively. But, on a whim, I let it grow wild, as it had been when I was teenager. Immediately, in very small but significant ways, my life changed. I started getting speeding tickets all the time–and I had never gotten any before. I started getting pulled out of airport security lines for special attention. And one day, while walking along 14th Street in downtown Manhattan, a police van pulled up on the sidewalk, and three officers jumped out. They were looking, it turned out, for a rapist, and the rapist, they said, looked a lot like me. They pulled out the sketch and the description. I looked at it, and pointed out to them as nicely as I could that in fact the rapist looked nothing at all like me. He was much taller, and much heavier, and about fifteen years younger (and, I added, in a largely futile attempt at humor, not nearly as good-looking.) All we had in common was a large head of curly hair. After twenty minutes or so, the officers finally agreed with me, and let me go. On a scale of things, I realize this was a trivial misunderstanding. African-Americans in the United States suffer indignities far worse than this all the time. But what struck me was how even more subtle and absurd the stereotyping was in my case: this wasn’t about something really obvious like skin color, or age, or height, or weight. It was just about hair. Something about the first impression created by my hair derailed every other consideration in the hunt for the rapist, and the impression formed in those first two seconds exerted a powerful hold over the officers’ thinking over the next twenty minutes. That episode on the street got me thinking about the weird power of first impressions.

4. But that’s an example of a bad case of thin-slicing. The police officers jumped to a conclusion about you that was wrong. Does Blink talk about when rapid cognition goes awry?

Yes. That’s a big part of the book as well. I’m very interested in figuring out those kinds of situations where we need to be careful with our powers of rapid cognition. For instance, I have a chapter where I talk a lot about what it means for a man to be tall. I called up several hundred of the Fortune 500 companies in the U.S. and asked them how tall their CEOs were. And the answer is that they are almost all tall. Now that’s weird. There is no correlation between height and intelligence, or height and judgment, or height and the ability to motivate and lead people. But for some reason corporations overwhelmingly choose tall people for leadership roles. I think that’s an example of bad rapid cognition: there is something going on in the first few seconds of meeting a tall person which makes us predisposed toward thinking of that person as an effective leader, the same way that the police looked at my hair and decided I resembled a criminal. I call this the “Warren Harding Error” (you’ll have to read Blink to figure out why), and I think we make Warren Harding Errors in all kind of situations– particularly when it comes to hiring. With Blink, I’m trying to help people distinguish their good rapid cognition from their bad rapid cognition.

I used to get that question all the time with The Tipping Point, and I never really had a good answer. The best I could come up with was to say that it was an intellectual adventure story. I would describe Blink the same way. There is a lot of psychology in this book. In fact, the core of the book is research from a very new and quite extraordinary field in psychology that hasn’t really been written about yet for a general audience. But those ideas are illustrated using stories from literally every corner of society. In just the first four chapters, I discuss, among other things: marriage, World War Two code-breaking, ancient Greek sculpture, New Jersey’s best car dealer, Tom Hanks, speed-dating, medical malpractice, how to hit a topspin forehand, and what you can learn from someone by looking around their bedroom. So what does that make Blink? Fun, I hope.

6. What do you want people to take away from Blink?

The Tipping Point was concerned with grand themes, with figuring out the rules by which social change happens. Blink is quite different. It is concerned with the smallest components of our everyday lives–with the content and origin of those instantaneous impressions and conclusions that bubble up whenever we meet a new person, or confront a complex situation, or have to make a decision under conditions of stress. I think its time we paid more attention to those fleeting moments. I think that if we did, it would change the way wars are fought, the kind of products we see on the shelves, the kinds of movies that get made, the way police officers are trained, the way couples are counseled, the way job interviews are conducted and on and on–and if you combine all those little changes together you end up with a different and happier world.